Birthday "Cars" for a Grandson

First: A lesson to learn from my ordeal. Computer problems stopped me in my tracks last night and I am finally up and running. The router for my wireless network just stopped working. Four technicians at two companies couldn't figure out the problem. Frustrated and thinking the router died and would need to be replaced I tried one more thing. All cords and cables had been unplugged and replugged except one --- the ethernet cable at the back of the computer (the hardest place to get to). I unplugged it and replugged it and Voila! everything came back! I have no idea what happened except that we had storms in the area and maybe something went through that complex pathway and pushed the connection so it was slightly off. So, lesson learned: unplug and reconnect everything first. 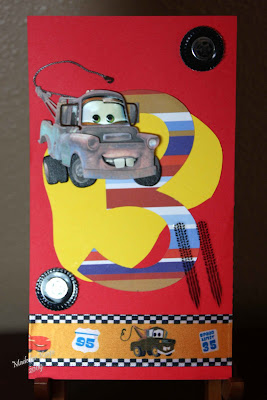 It is so hard to believe that three years Jerry's son called and said "You have a grandson!" Wow, that little cutie Leland is growing up so fast! I haven't seen him for over a year but, in his travels, Jerry is able to spend time with them. I've got to get a new picture of him!
Anyway, like most kids these days, Leland loves the Disney "Cars". We sent him sheets and a comforter in the "Cars" theme for his new big boy bed. This card is on the way to him. There isn't a single stamped image on it but lots of 3D stickers and the Happy Birthday was cut with my Cricket. The border is ribbon I found at Walmart. Quick, easy and very fun! 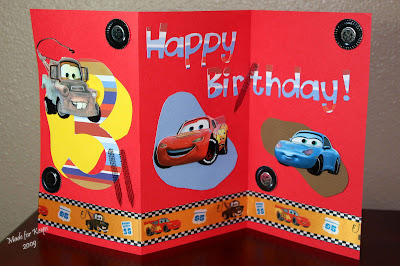 Thanks for stopping by!

In God We Trust
Posted by Barbara at 6:24 PM

Email ThisBlogThis!Share to TwitterShare to FacebookShare to Pinterest
Labels: Family

A Cricut? Is this new or are you just feeling guilty about neglecting this vital crafting tool? LOL Anyway, great card! I'm sure little Leland loved it! xxD

So cute - Leland will love it! Very special card for him.

Oh this is fab Barb I bet Leland loved it I know how boys love their cars!
Hugs
Juliexx

Too cute, Barb! That ribbon for the border is genius!! What a fun card, indeed!!

Welcome To My Blog!

Thank you for stopping by and taking time to browse through my posts. When I was a little girl my grandmother told me I was made for keeps. I like to think that my cards are, too, so my little card business is named "Made For Keeps". When it gets to be a BIG card business, it will still be Made For Keeps!

I'd love to hear from you!

Copic Certification class was so much fun!

For our International friends!